In a recent blog post, Digital First Media CEO John Paton discussed his company’s test of using Google Consumer Surveys instead of a traditional paywall to realize additional revenue. The idea is that users would pay for content with their data, rather than their cash. But while this format might potentially be more profitable  than a traditional paywall for a local media company, I’m not quite sure it’s a sustainable substitute. And it might end up helping the competition.

It’s a great concept in the abstract. A user who is accessing unique content is more willing to answer a survey question than to pay. And the survey response will yield the publisher somewhere around $0.05.

As Paton describes in his blog post (and as apparent on the Digital First sites), these surveys pop up after a user views 10 photos in a gallery. In this case, though, I don’t see these surveys serving as a substitute for a paywall but rather as a substitute for an ad. Photo galleries are notoriously difficult to monetize properly, although they are the most popular type of content on many news websites: But users go through the photos so quickly they often don’t see the ads. To be able to generate $0.05 every 10 page views is great. Assuming everyone responds, this is an added $5 CPM on the photo galleries.

The reason I don’t see this as having anything to do with a paywall or subscription is that there really isn’t a wall and the user isn’t paying. It would be like calling an interstitial ad (such as the one on Forbes.com) a paywall because a user must view an ad before accessing the site. Additionally, there isn’t anything preventing a newspaper with a paywall from using a Google Consumer Survey to bring in additional revenue.

But while it may be a good source of revenue, it’s not a long-term solution for local news sites because there is an inherent supply-and-demand issue — not very different from the one arising with online display ads. As more and more publishers adopt Google surveys, Google can begin dropping its publisher payout because it has enough supply. Similarly, ad networks used to pay more for display ad space. But as more and more publishers sign up for ad networks and the supply outgrows the demand, the CPMs decrease. For now the payout works and it’s additional income for newspapers in need of new revenue opportunities. 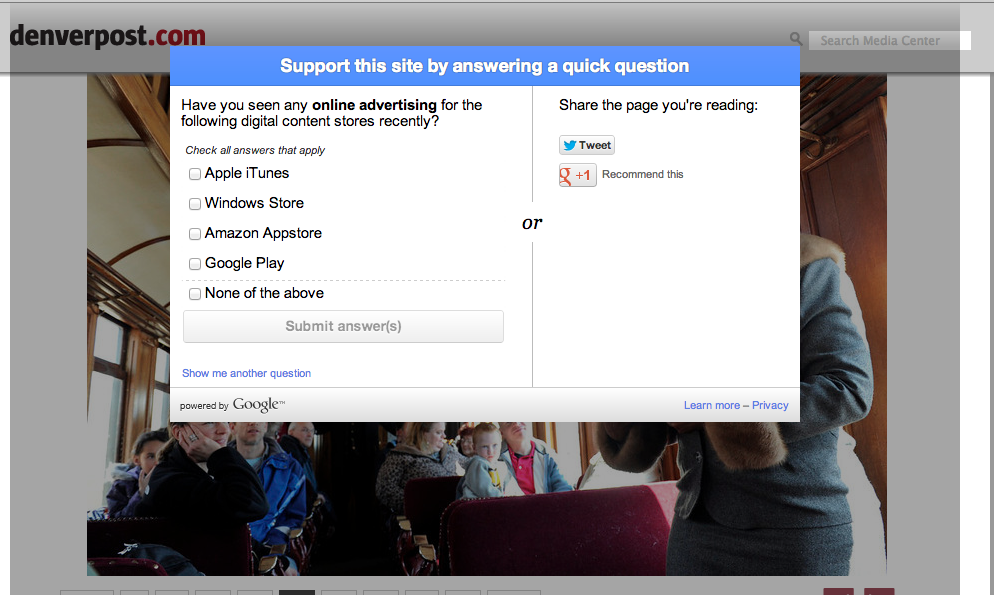 I do want to offer some additional caution to newspapers thinking of using the Google survey: Consider how Google is using and selling these surveys. Both the surveys I encountered were about ads I had seen on the Internet. While I do not know this for a fact, it appears that Google is using the surveys to either help optimize the ad buying it does for its clients or to report back to its clients on the ad effectiveness of a given campaign. The issue is that more and more newspapers are selling against Google’s display ad network, both at the local and national levels. Consider then if these surveys help your competitor compete against you. I’m not saying don’t use them; just consider the implications.

While I agree with Paton that paywalls tend to be tweaks of a broken model instead of real solutions, Google surveys are even more likely to be just a tweak than a solution. At the very least paywalls change the nature of the relationship with the consumer which, depending on your vision of the solution to the revenue problem, might be a necessary step in helping newspapers become profitable online.

Matt Sokoloff is a 2012-2013 Reynolds Journalism Institute fellow working on a project to help local independent websites and bloggers gain additional revenue opportunities. His background is in building digital products for media organizations. Read more about his current work here and respond in the comments or to sokoloffm@rjionline.org or @MattSokoloff on Twitter.