The advent of Klout and other new forms of social influence tabulation mirrors the power shift of media influence from traditional to social channels. Anybody with a voice can build a following, and the new business models evolving around influence metrics allow businesses to reward influencers with the hopes of converting them into advocates.

Klout’s first foray into monetization, called Klout Perks, rewards influencers targeted by their client “advertisers” with products like Windows Phone or Moo business cards. The company is focused on delivering a rewards product like this to national advertisers like Microsoft and Moo because it is easier to scale campaigns nationally, as opposed to working with local advertisers in smaller markets.

So how can rewards programs based on influence be developed for local markets? When local influencers are identified and curated for either public or private display to a community, local businesses can “perk” them. Courting local influencers will have a larger impact for local business simply because the influencers’ networks and their target customer base are equivalent. There’s a reason why Klout focuses on the scalable national rewards model; most local businesses don’t understand social media marketing and daily deals strategies, and getting them accustomed to offering rewards is simply a huge education effort. 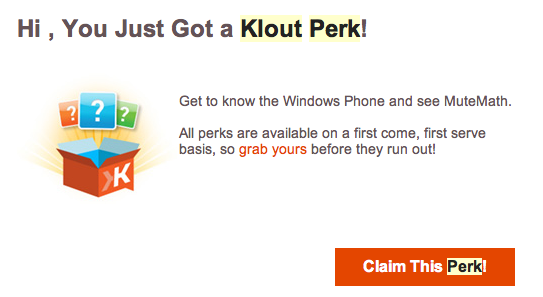 Local influence metrics are calculated differently than the simple adding up Twitter followers and Facebook likes. Johnny Lee, co-founder of LoClout, a company building a database of local influencers as a B2B service, says that local reach and engagement as the key influence metrics. Local reach defines activities within a geographic radius (i.e. how many followers are located in the same city as the influencer), and engagement defines how many of these followers, say, click on the influencer’s Yelp review.

Lee suggests several heuristic methods to assess engagement without access to the raw traffic data held by social networks. Popular user lists, bookmarks and “elite” memberships developed in Yelp, Foursquare and other networks can elevate influence status and be incorporated in the algorithm. Yelp and Foursquare checkins published on Twitter and Facebook can also be analyzed for retweets, shares and comments.

LoClout focuses on supplying this kind of local influencer data to brands and companies for marketing and analytical purposes. On the consumer side, Roost has developed a metric called Scorecard that measures local influence of Facebook accounts and pages. Kred.ly is also developing a consumer facing local influence metric.

The main hurdle associated with developing influence-based programs for local business is simply the challenge of marketing another new promotion method to a merchant inundated by pitches from Groupon, Yelp, Foursquare, and many others. Leveraging local influence will eventually become a powerful marketing tool, but it will likely take the field sales forces of social media marketing agencies and companies that channel local influencers like Yelp to develop these new business models.

Patrick Kitano is founding Principal of Domus Consulting Group, an advisory for social commerce and social engagement solutions, and administrator of the Breaking News Network, a national hyperlocal network devoted to community service. He is the author of Media Transparent, and contributor to Social Media Today, Daily Deal Media, and The Customer Collective.

Case Study: At Choice Hotels, a Check-In Consolidator is Key