The close of 2012 was not kind to pure play daily-deals companies. With the well-publicized investor relations struggles of industry behemoths to the trials of small- and medium-sized sites looking to attract new rounds of venture capital, many pure-plays spent the end of last year fighting for survival and several exited the market.

Given the challenges facing pure plays (and the saturation of news stories chronicling their issues), a casual observer could be forgiven for thinking that the deals space is experiencing a major downturn. Recent studies, however, suggest a more bullish outlook for deals in 2013.

At its December conference, BIA/Kelsey confirmed its revised deals forecast, which was adjusted upward from a previous estimate earlier in the year. The firm expects U.S. consumer spending on deals (including daily deals, instant deals, and flash sales) to grow from $873 million in 2010 to $4.2 billion in 2015, representing a 36.7% compound annual growth rate (CAGR). In March, BIA/Kelsey had pegged 2015 deals spending at $3.9 billion, with a 35.1%  CAGR. 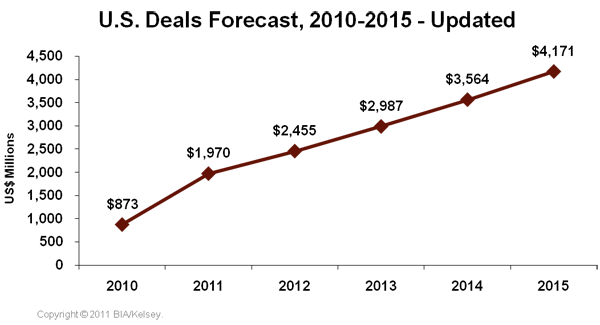 In other words, more people are buying more deals for more money. Not a bad place to be.

A July study by Rice University found no evidence to support the popular wisdom that deals are slowing down and noted a variety of positive signs for the industry as a whole. Two of the most compelling data points from the Rice study include the following:

A Strategy for Publisher Success in Deals
As I noted in an earlier Street Fight column, local media companies are well positioned to own a large piece of the deals market thanks to their unique assets of loyal audiences and established brands, local sales forces, and multimedia promotional reach. It has become apparent today that local media companies enjoy another key advantage over pure plays: economies of scale.

A local media company can build a deals program into its existing promotional department at a fraction of what it costs a start-up company to launch a site, build a brand, hire a sales force, and generate a viable customer base. As investors become more skeptical of backing start-up deals companies and venture capital becomes tighter, this advantage will become more pronounced.

That is not to say that local media companies can coast to an easy victory in the deals space. If the last two years have taught us anything, it is that not just anyone can start a profitable deals program. Despite their favorable position within the industry, local media companies still need to put time and resources behind their deals programs, with steps that include the hiring of dedicated staff, creation of thoughtful annual plans, implementation of a disciplined sales process, growth in their email databases, and use of their promotional power to enhance consumer awareness. All of these elements require a long-term commitment.

For local media, the payoff is worth the effort. Despite the recent struggles of pure plays, deals are not a passing craze and will not be rendered obsolete anytime soon. Deals are an example of performance-based promotion, which has long been a growing category in the marketing world. Local media companies have decades of experience in running successful promotions and have the potential to remain major players in deals and the broader category, in 2013 and beyond.

Matt Coen is the president and cofounder of St. Louis, Mo.-based Second Street, a provider of private-label online promotions platforms for media companies and brands.

Social Isn’t Search: Why Apple Should Think Twice About Foursquare