Geo-Intent: Going to Where the Puck Will Be

In my last column for Street Fight, How the GeoWeb Will Change Consumer and Business Behavior, I talked about how location-based technologies will continue to be a dislocating force across B2B, B2C, and C2C Markets.

So what can make a business geo-disruptive?  Beyond location awareness, it is far more important to know where a person is headed and his needs and wants at the destination.  Let’s call this “geo-intent.”

Consider OpenTable, the dining reservation booking engine. It’s an excellent example of a multi-platform application that requires users to express their intent for dining — in terms of travel distance, timing, type of cuisine, and potentially many other factors. OpenTable is opt-in, and the user readily volunteers his geo-intent in as much detail as he or she is willing to share. While restaurants may dislike splitting a booking fee with OpenTable, isn’t this better than a world where geo-intent is unknown, and mobile devices are bombarded with tiny, irrelevant banner ads when you are within range of a seemingly clueless advertiser? 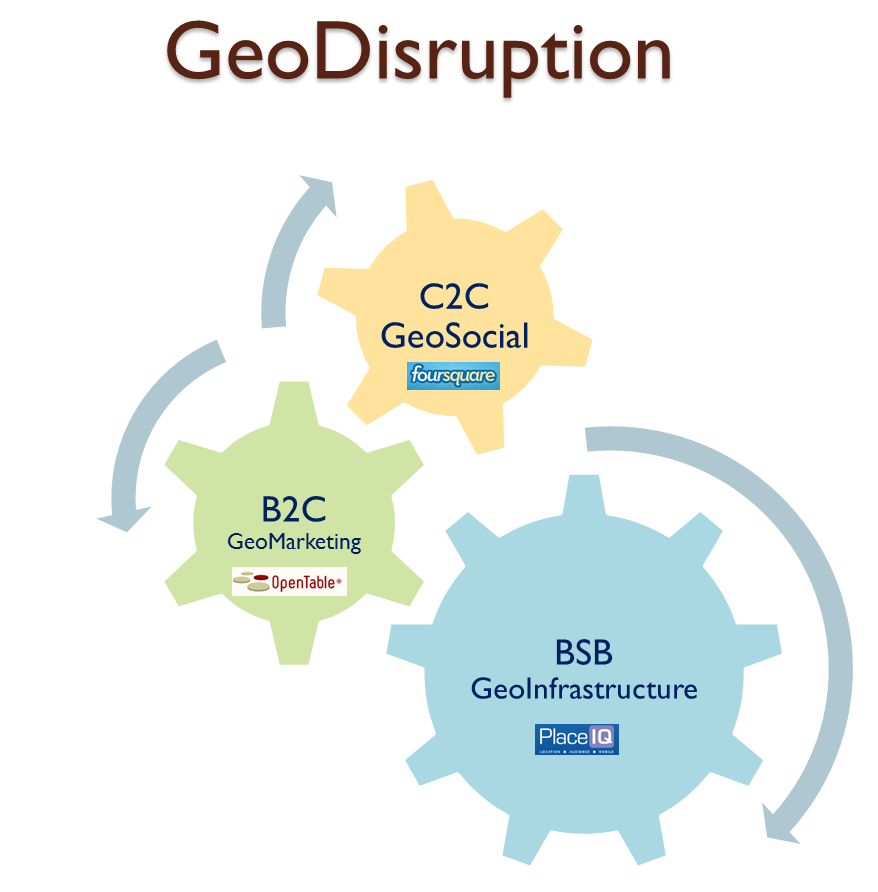 I recently came across a very clever early stage company called Transit Chatter that’s a wonderful illustration of using predictive analytics to determine geo-intent. Transit Chatter is designed to be the app for everyone riding the Chicago Transit system, which, unlike New York, has most of its riders above ground getting a live mobile signal. The app knows where you are going and when you will get there, and provides timely information and advertising based on this geo-intent. Plus, it reaches commuters when they are highly likely to be engaged in their mobile devices, without a TV in the background. Once the commuter is disembarking from the train or bus, and caught in the rush of the crowd, it’s too late.

Waze, the Israeli crowd-sourced navigation app that Google just purchased for $966 million, also has real-time information on where you are headed, but an engaged mobile user on a traditional mobile device should not be in the driver’s seat of a moving vehicle. There is geo-intent in the app, but engagement at the wrong time can be life-threatening. Waze, of course, offers other advantages to Google in terms of keeping its geo-data robust, and Google wants to replace human drivers anyway.

Other notable examples of geo-intent include weather.com, which elicits information on your destination and activities, and, of course, numerous travel sites.  All these companies are a great example of Wayne Gretzky’s advice: “Skate to where the puck is going to be, not where it has been.”

The risk of focusing myopically on where the puck, or an individual, is at a particular moment, is that by the time you message gets there, it’s marginally relevant at best, annoying and creepy at worst. Poorly targeted mobile ads, particularly ones that are supposedly more clever and disruptive, are the enemy of enterprises that relay on consumer’s opting in to truly useful geo-applications.

One final note, congratulations to Jumptap, cited in my last column as strong “geo-infrastructure” provider who offers marketers new ways to make location relevant, which was sold to Millennial Media in a deal valued up to $225 million in August.

Jason E. Klein is the founder/CEO of On Grid Ventures, and investment and advisory firm focused on the startup and reinvention of businesses capitalizing on digital and location-based technologies.  Follow him on twitter @JKNews.

Here’s What A Good Lead Looks Like in Local