Last week, I attended Street Fight’s NYC Summit and listened to a discussion by Yipit co-founder Jim Moran highlighting trends in the daily deals space. One of his major focal points was Groupon’s Deal Marketplace initiative, which was launched late last year.

The Deal Marketplace is Groupon’s shift in strategy from providing one-off “daily deals” to offering longer-running, recurring campaigns. With the launch of the marketplace, local businesses now can offer discounts on their goods and services for an extended period of time.

Initially, when daily deals companies like Groupon and LivingSocial exploded in popularity during the economic downturn, they promised to bring local businesses hundreds of new potential customers by placing their promotions in front of the deal providers’ millions of e-mail subscribers. It has been my understanding that the purpose of daily deals is purely customer acquisition — to bring in new customers, not to target your existing ones.

With the new marketplace focus, however, it seems as though this is no longer the case. I recently did a quick Google search for some of Groupon’s top New York City Marketplace offers and I found that Groupon seems to be cannibalizing the local businesses’ existing customers by using Google AdWords to bid on nearly every Marketplace deal’s local business name: 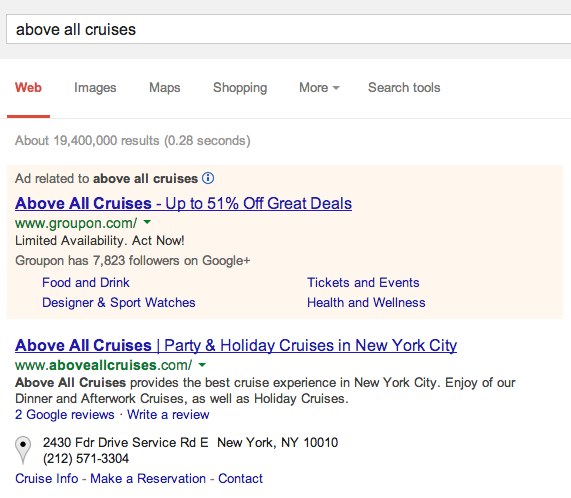 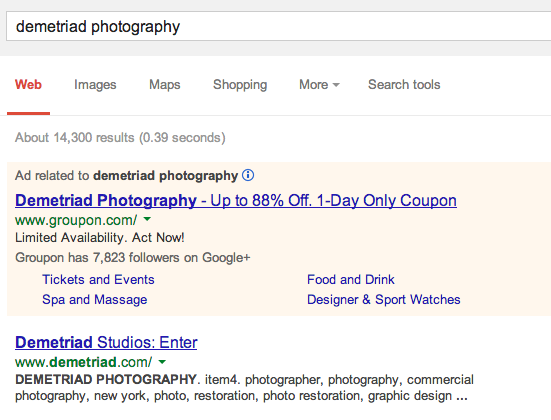 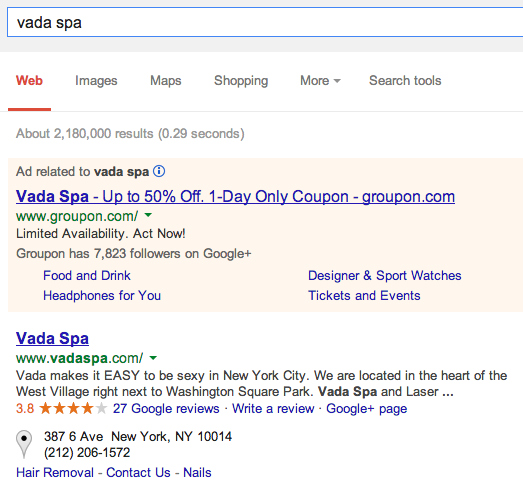 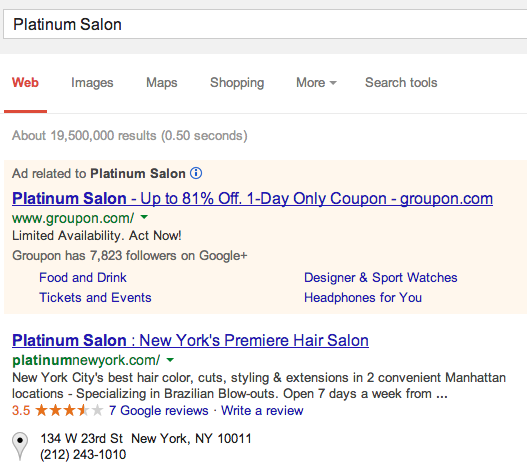 This new strategy seems unfair to the local businesses working with Groupon. It’s one thing for Groupon to advertise on keywords within your category, but entirely another issue when they begin to bid directly on a business’s name. By doing this, existing customers who are already searching out the local business are being directed first to the deeply discounted Groupon deal.  This strategy is hugely beneficial for Groupon, but very detrimental to the local businesses that stand to break even or lose money from the deal.

To my mind, Groupon shouldn’t really be earning revenue from existing customers who are already searching out a local business, but from new customers who only purchased the deal because they found it on Groupon’s site or in a daily email.

For many of us who work in hyperlocal that have strived to build truly beneficial technologies to help SMBs, we have done it for our passion to help local businesses succeed. Companies that pull tactics like these give everyone in the space a bad name. It’s my hope that Groupon will stop this deceptive practice.

Do you agree or disagree? I’d love to hear your thoughts in the comments.

Sean Barkulis is co-founder of UPlanMe, a hyperlocal, technology platform that helps local businesses market and promote their specials and events across the web.  Through UPlanMe Consulting, he provides local businesses with full-service digital marketing solutions. He is also author of “How to Market Your Business Online.” He can be reached via Twitter at @SeanBarkulis.